I have been asked, many times, if the is really an Israeli dog, found exclusively within our borders.  The truth is that free living dogs of this type are found throughout the middle east – the borders have changed many, many times through the centuries, but the dogs have always been there.  What is true is that, although there are dogs of this type in various places, there has been absolutely no interest anywhere in the middle east other than in Israel in preserving these dogs and developing them as a breed, keeping records and pedigrees, and all the other “bureaucracy” that our world requires these days to present a dog as a purebred.  So the Canaan is indeed Israeli, and almost all the foundation stock and the dogs that have subsequently been introduced into the gene pool have been born in .

This does not mean that we are averse to Canaans that may come from across one border or another.  One of our very first dogs was a tiny puppy that was brought across the border from in Jordan, who became known as Sufa me , one of the foundation bitches of the modern breed.  I have seen photos of lovely Canaan type dogs in , in , in , in .  However, politics dictates that there is a border in between.

So I was thrilled when I was able to get in touch with a fellow in Jordan who had two young Canaans that needed a home.

As ever, in our modern times, the internet was the way we got in touch.  The story was that these two youngsters had been raised in a village and were intended to be guard dogs. For a reason unknown to us at this point, the owner decided he didn’t want the pups anymore (about four or five months old), and he brought them to a veterinarian in to be put to sleep.  The vet, obviously in the profession because of his love for animals, refused to put two strong healthy pups to death and took it upon himself to look for someone to adopt them.  Mat, an American living and working in , saw the notice by the vet, and decided to take the dogs temporarily to find them homes.  He was unable to keep them permanently, as he had a 13 year old pet dog that would in a few months be coming to with his wife, and wouldn’t be able to live with two young active pups.

The vet told Mat that the dogs were Canaans.  Mat is a dog lover but not an expert in breeds, and would never have thought that they were anything but mixed breed street dogs.  I have great admiration for this veterinarian, who does not have much chance to see a wide variety of dog breeds, and to identify the two as Canaans was exceptional.

Mat’s wife, in the , put up some posts on the internet to try and find someone to adopt the dogs, and her post was forwarded to me by a friend in the .  I immediately got in touch.

The photos Mat sent me were not very good. We talked on Skype and he tried to get the dogs to stand up and let me see them, but they were not particularly interested.  But from the bit I did see, and from his description of them and their behavior, they definitely seemed to be Canaans.  I told Mat that if we could get them to , I would certainly take them and either keep them here or find good homes for them.  Homing them here would certainly have a much higher possibility of success than in , where there was little interest in keeping dogs as pets.

Crossing the border is not a simple affair, and certainly not with dogs.  After some discussion, Mat volunteered to take care of all the necessary vaccinations and paperwork, and to take a day off work and drive them to .

Although mentally the distance between and may seem huge, in fact it is only about a two hour drive to the border crossing, and another two hours or so from the border to my place.  Mat planned to get to the border at 8 a.m., so that he could get here early and then drive back – he had to be at work the next day.  He would call me when he was at the border.

8 a.m. came and went, and another hour passed, and then another…I was getting very worried.  What if they wouldn’t let him bring the dogs in?  Who knew what problems could occur?  But finally he called.  He had crossed through the Jordanian checkpoint – it had taken over two hours, not because of the dogs, but because of the long line waiting (even at 8 a.m.!) and the paperwork, and now he was waiting to go through the Israeli checkpoint.  Hopefully, this would go more quickly.  He would call me when he was through and on the road to my place, so that I could also explain how to get here.

Another few hours passed, and no call.  I tried to call his cell phone and got no answer.  My friend Eytan, who was very interested in the Canaans and had come also to meet Mat and see the dogs, and I were again getting very stressed – it was already mid afternoon.

The dog alarm system activated, telling me with their barking that a stranger was here.  And there was Mat!  His cell phone, a Jordanian number, had stopped working as soon as he crossed the border….wonder why….so he couldn’t call, and he just drove straight here.  Obviously aside from initiative, he has great navigation skills…

He was surprised at the attitude of the Israeli border guards, though.  He said that when he went through the Jordanian checkpost, no one was in the least interested in the dogs.  On the Israeli side, everyone came over to pet them and ask about them.  Wow, he said, Israelis do love dogs!

And here were the dogs!  Love at first sight!  They are indeed Canaans, and lovely ones.  Their ears are still only half up, but they are only about seven or eight months old, and otherwise they are beautiful.  And super temperaments!  The two, called Jenny and Jimmy by Mat, walked into this strange place, with dogs all around barking at them, with complete self confidence, tails up, and joyful to meet new people, outgoing and sure of themselves.  And after a few minutes, they decided that the yard where we were standing was their territory and they began to guard it from a neighbor who passed by.

Jenny and Jimmy have settled in very well, accepting their new home with no problems, following me around and demanding attention as if born here, and starting to meet the other dogs.  Their yard has become their territory, and the other Canaans, after looking them over, have admitted them to the “canaan society” – they obviously speak the right language.

These two dogs can prove to be an incredibly valuable addition to the gene pool of the Canaans, as they come from an area that we have never had access to.  And aside from that, they are lovely dogs, and it is a pleasure to have them here.

And we have a new friend – Mat had to drive back almost immediately, but will come to visit in again when his wife arrives.  He has learned about the Canaans and become fascinated by them – as do so many when they get to know the breed.  So he may become “our man in ” and maybe we will have the chance to get more dogs from across the .

Posted by The Habibi Diaries at 7:55 AM 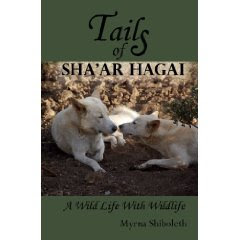